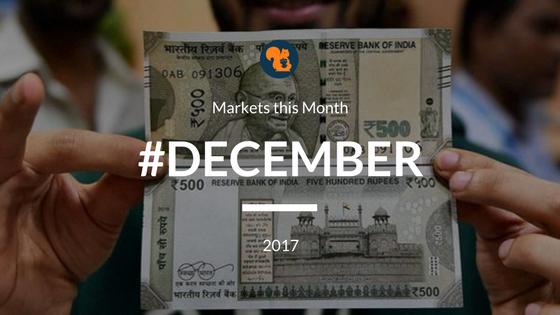 Highlights from the markets during the year

Among market capitalization, mid-cap indices outperformed the BSE Sensex for the fourth year running whereas BSE Smallcap index was the best-performing index across all local indices. It is worth mentioning that, in 2017, MSCI India small-cap index delivered the best returns across more than 140 countries large, mid- and small indices in the world. 2017 was the third successive year with the domestic mutual fund (DMF) investing US $18bn into equities, far stronger than Foreign Portfolio Investment (FPI) investing US $7.5bn.

Overall trading activity remains strong driven by derivatives, cash trading volumes were robust in 2017. Annual cash turnover hit a new high in 2017, breaching the previous high of 2007. India’s market cap to GDP rose to the highest level in seven years at 92% but remains below 2007 (149%).

Lastly, the year witnessed few key events that shaped the market much strongly – the year began with merging of Railway budget with general budget. The government was able to launch Goods and Services Tax (GST) effective July 1, 2017, that improved indirect taxation regime thereby making India a unified market. In the same month, Ram Nath Kovind was elected as the President of India providing the ruling party with further political muscle power. Also, during the year, BJP gave a good show by winning state elections of Goa, Uttar Pradesh, Gujarat and Himachal Pradesh helping the party and its allies claim the majority in Upper House of the Parliament. The global think tanks made no mistake and credit rating agency Moody’s upgraded India’s sovereign rating while World Bank realized India’s improving business environment that was well reflected in India jumping 32 places in Ease of Doing Business Ranking.

Things to watch out for January 2018 and its impact

Union Budget – Union Budget is likely to be presented in February 2018; it would surely heat up the market environment based on different opinion from market makers on probable changes in the budget

Q3 results of FY2017 – India Inc will start to report the Q3 earnings starting January 2018. Performance of Q3 will be an indicator of consumer sentiments and will be a market mover provided the festive season sales during Q3 are better than expected signaling consumption recovery

War between the US and North Korea – Any action from the two economies could lead to selling pressure in Indian equities.