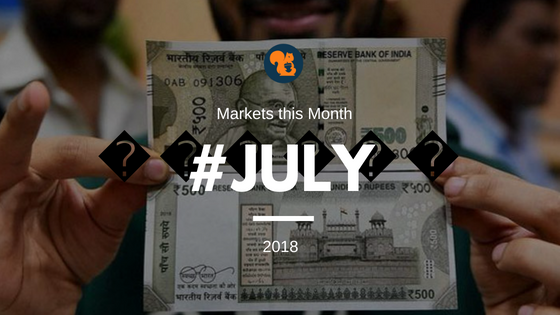 Indian markets rose by nearly 6% during the month. The equity market, though started on a positive note, was primarily affected after the opposition parties tabled a no-confidence motion against the government in the Lok Sabha.

This resulted in some degree of selling pressure that was intensified particularly for metal firms amid weakness in the global commodity prices. Selling pressure was also seen in other sectors such as realty, healthcare, and automobile. Having said that the loss was prevented by the end of the third week with oil marketing companies providing the support on the back of fall in crude oil prices. The losses were also chipped off after the government wins the trust vote with a much higher margin than anticipated.

During the last week, the market continued with its cheer and was major supported by large cap counters such as Maruti Suzuki, Reliance Industries, HDFC twins and the likes. The bulls took the center stage with Sensex advancing new highs every day. The rally was also supported by the optimism surrounding improvement in Q1 results and also due to the reduction in GST rates announced by the GST council by as much as 10% on a wide range of products.

Other key highlights of the month are: