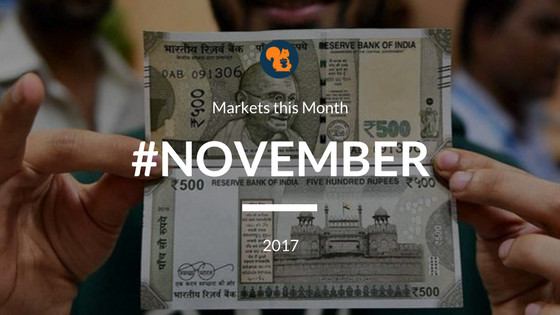 Highlights during the month

Indian market is inching up and is continuing its streak of clocking fresh highs. For the month of November, the Nifty remained flat with both positive and negative events during the month along with moderate activity from FIIs and DIIs. During the month India Inc.’s earnings performance for the Q2FY18 turned out to largely in line with street’s expectation. Both revenue and profit improved when compared to previous quarter thereby comforting people who were concerned regarding demonetization and hasty implementation of the GST.

Another development came when World Bank moved India into the top 100 countries in its Ease of Doing Business global rankings on the back of sustained business reforms over the past several years. The 30-rank appreciation came when the largest lender, on its 15th anniversary of the report, noted that India adopted 37 reforms since 2003 of which nearly 50 percent were implemented over last four years.

The cheer continued with a surprise rating upgrade by Moody’s where India’s rating improved to Baa2 from Baa3 with a change in outlook from positive to stable. The upgrade, after 14 years, came on the back of continued progress on economic and institutional reforms, enhanced growth potential.

Soon after Moody’s upgrade, World’s largest credit rating agency Standard & Poor’s kept its sovereign rating for India unchanged at ‘BBB-minus’ with ‘Stable’ outlook citing vulnerabilities due to low per capita income and high government debt despite GDP strong growth. While the government and economists, in no time, termed the action as “unfair”, the D-street already started to discount the news with increased selling. The selling pressure continued with futures series expiry nearing.

Lastly, the month closed with BSE Sensex losing 453 points, or 1.35%, to 33149.35, logging its biggest single-day fall since November 15 last year on account of alarming fiscal deficit numbers that resulted in heavy profit booking. The good news of strong Q2 numbers for India’s GDP could not help as it was released after market hours.

Things to watch out for December 2017 and its impact

Volume in terms of Foreign Institutional Investors (FII) should not matter during the month given the festive season in far-east. Other key monitorable events include:

Assembly Election results – Gujarat elections will play a larger role in determining upcoming 2019 General Elections. Thus, it would be crucial to see if PM Modi’s party will be back to Gujarat once again

RBI Policy meet – Central bank is expected to maintain its status quo given GDP growth numbers are healthy and inflation is moderately within comfortable limits. However, any rate cut could cheer the market