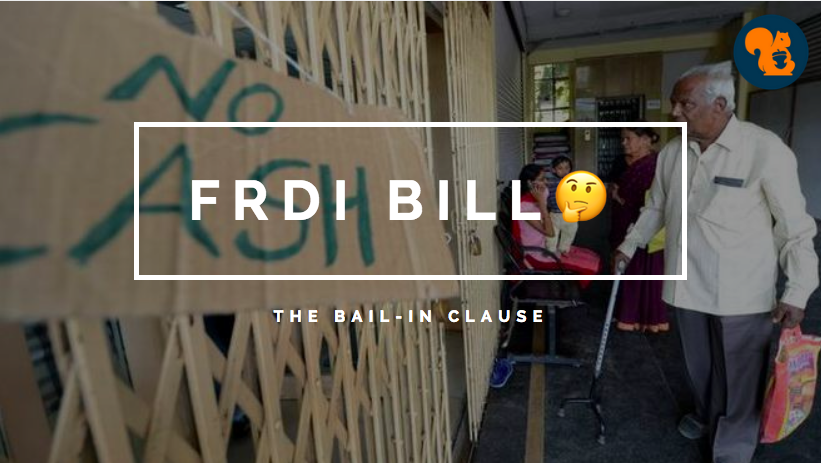 The government recently issued another clarification on the Financial Resolution and Deposit Insurance Bill in an attempt to make things vivid about the many misgivings about the proposed Bill’s defamed law: the bail-in. To wind up or resolve an ailing company, RC(Resolution Corporation) will be empowered with a bail-in, in which a bank’s liabilities can be cancelled or modified to aid it’s finances. “As such, the Bill is to work in tandem with the Insolvency and Bankruptcy Code.”

The FRDI Bill seeks to combine all the different regulatory laws covering India’s financial organisations. It also means to develop a Resolution Corporation (RC) that will be resolving the issues of the ailing companies. What’s important for you to know is, the aid to the needy companies would be provided by the money of the common people, which they think is in safe hands at the bank. The government also clarified that under the current Deposit Insurance and Credit Guarantee Corporation Act, deposits up to ₹1 lakh are insured. Under the FRDI Bill, the RC will have the power yo increase this limit to any amount it chooses. So, it is a little relief that atleast that much amount would be protected.

The bigger picture: Although there is an assurance by the Government of the protection of our money in the event of a bail-in, that isn’t actually protecting the depositors and their hard toiled money. The RC could enforce the bail-in whenever it finds the need, on just a meagre assurance to the customers.

For you personally: The bail-in clause is a new revolution in the field of finance, good or bad, let time do the judging!

You should know about this because it’s your hard earned money at the bank, that’s at this risk. The RC has the power to enforce a bail-in, where the bank could be set free of it’s liabilities (or they could be changed partially) at any time the RC finds it in need of serious financial aid. You could relax for a little bit, as the Government has finally clarified that the bail-in clause will not be used for public sector banks (PSBs). It also repeated its implicit guarantee of PSB solvency. In an indirect manner, it said that it is totally ready to face any such situation, i.e. it stands prepared to bail-out the PSBs if needed, removing the need for a bail-in.

Another important point that the statement made was that “the cancellation of the liability of a depositor beyond the insured amount cannot take place without his or her prior consent”.

So, the bail-in clause can only be used in private banks, and that too if it’s customers permit it to. So, vaguely, the Government has tried to relieve you, assuring you that your money is not at risk. But is it actually protecting the depositors? No. The use of the bail-in clause by the RC will be “subject to government scrutiny and parliamentary oversight”. In the condition of a bail-in, the RC will have to guarantee that depositors get back at least as much money as they would have if the bank had been liquidated.

Our app is amazing, and let’s you invest in mutual funds in a few clicks and our experts pick the best funds for you keeping in mind your investment requirements & your investment goal.

You HAVE to check it out, go use this link!

Saurabh Asked us:
Do I need to pay taxes on my return?

The Tax liability will be determined on the basis of the product that you choose and the durations that you stay invested. We will indicate from time to time the Tax liability, if any.