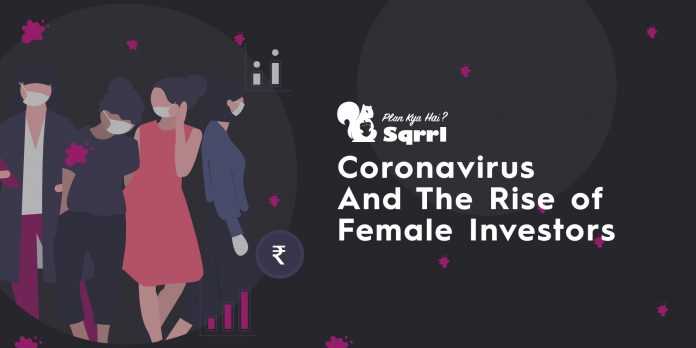 With the Covid-19 pandemic hitting millions globally, the markets saw huge ups and downs over the past few months. While the months of March, April, and May saw a huge decline in the number of investors, the states of the markets have been restoring since June. What’s more is that we have seen an astonishing trend in the active demographics in the market!

Wondering what we mean? Well, to put it in simple words the investing population during the pre-covid era was majorly male. However, since the beginning of the pandemic stock & share markets have recorded a noticeable increase in the number of female investors.

Online stock trading platform Zerodha has seen a whooping rise of above 40% in the number of it’s users during the first half of the year. While the number of investors was close to over 2 million in February, by June it had crossed the 3 million mark .

As far as the number of women investors is considered, the number on Zerodha alone went up by 59% as compared to the number before the pandemic. Infact, what is more notable is that the average age of women clients on the platform has also decreased. At the end of February, the average age was 36 years however, it went down to 33 years as of today.

This decrease in the average age shows how a relatively younger generation of women is becoming more aware and educated about the markets. We are seeing it as a positive sign that will have a huge impact in the long run with a larger number of women becoming financially literate.

These results are not just limited to Zerodha. Another fine brokerage firm UpStox has seen a similar trend. They have recorded a growth of 53% in active female customers from April to June 2020, as compared to the period between January and March 2020.

Ravi Kumar, Co-founder and CEO, Upstox said, “We have seen a growth of 32% in account opening by women from April to June 2020, as compared to the earlier quarter, of which 70% consists of new-to-market investors”. Women here are more inclined to trading than investing. Out of the total number of active female customers on Upstox, 55% are traders, whereas 45% are investors.

To drive the point home we will also talk about another popular Bangalore based investing and stock broking firm, FYERS that has shown similar results. As per data, the firm has seen a 50% growth during the three months of lockdown. Before the pandemic struk, there were only 3% active women traders of the total customer base at the company. This number has now increased 10% in the last four months.

Tejas Khoday, Co-Founder & CEO, FYERS said, “Women, however, are more inclined to invest than trade. The duration of their trades tends to be slightly higher and they have wider stop losses. This is based on the observations of our risk team. In terms of expectations, they want high profits in a very short period of time without too many entry/exits. But this could also be because most of them are first-time investors.”

Why Has The Number Increased?

Ravi Kumar, Co-founder and CEO, Upstox also went on to explain why the number of female investors has risen. He said, “While the lockdown has given a lot of us the time to relook at our investment portfolios, what has brought more women into trading is the increased awareness of different investment avenues, growth in internet penetration, affordable online training solutions, and easy-to-use trading platforms.”