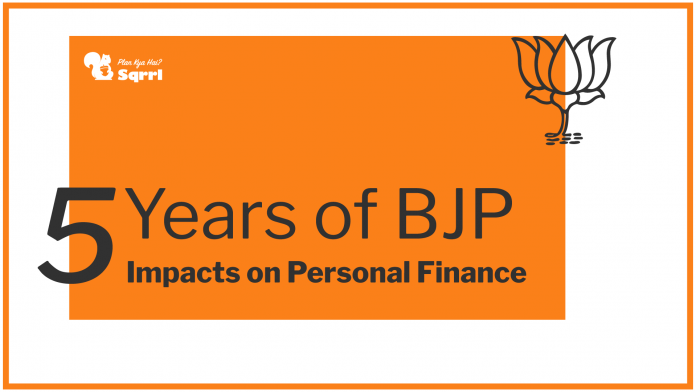 The talk of the town currently, as you all must be knowing, is “Elections 2019”. There’re growing speculations about will the power continue with the same house or will the baton change hands. But not a lot of people are talking about the time which has already passed.

How fruitful was that? And how did the present government performed? There are lots of questions if we’re to talk about the report card of the NDA government; hence, we thought of putting some thoughts behind it, especially on the personal finance front.

It won’t be wrong to call Mr. Narendra Modi led regime, one of the landmark periods in the Indian history. Money-wise, there were quite a number of happenings – demonetisation & implementation of Goods & Services Tax (GST) – the two most radical changes. Then there was the introduction of Unified Payments Interface (UPI), Marginal Cost of Funds Based Lending (MCLR), Housing for the lower income groups, big gains with respect to tax slabs, etc.

But the bigger question is what was the impact of these reforms, on a common man’s pocket. That is, how the reforms affected the Personal Finance of Indians?

We’ll look at them on a case-by-case basis.

Demonetisation and the development of India as a digital economy can be said to be very intricately linked. UPI was born around the same time and the cash crunch in the economy, led to its speedy adoption. A big change that was seen around this was that banks, which are otherwise known for their stringent methodologies, got on the UPI bandwagon very steadily. And it even saw a lot of new-age tech companies joining the fray, which ultimately helped the penetration of UPI and paved the way for digital India.

In hindsight, consumers proved to be the biggest beneficiary of the move as all the transactions could now happen in real time without the need for wallets.

The three of the biggest winners here were,

Pradhan Mantri Jan Dhan Yojana (PMJDY) – Per government reports, approx. 33 crore Jan Dhan Bank Accounts were opened during this 5-year period, out of which more than half were in rural and semi-urban areas. This is in line with the World Bank Global Findex Report (May 2017), which said that out of the total 51.4 crore bank accounts that were opened between 2014 and 2017, an outrageous 55% were from India.

Ujjwala Yojana – Per government estimates, till March 2019, almost 7 crore LPG connections had been distributed among poor households. Apparently, the number is greater than the 5 crore – what the government initially had promised. Also, out of the 7 crore, it’s said that 48% of the beneficiaries are from the SC/ST communities.

Deen Dayal Upadhyaya Gram Jyoti Yojana (DDUGJY) – With the government’s promise of electrifying all Indian villages within the first 1000 days of his tenure, the job was completed much before it, with electrification of 19000+ villages. As per government’s data, all of 597,464 Indian census villages have now been electrified.

Apart from these three, other schemes such as Pradhan Mantri Jeevan Jyoti Bima Yojana, Ayushman Bharat, Skill India, Pradhan Mantri Awas Yojana, and the likes, were either average or performed below the required standards.

The tax exemption limit for people with income upto 500,000 was a very thoughtful move by the Modi government. The move also saw effective removal of 10 percent slab which was replaced by 5 percent slab. While there was no movements for salaried class in the upper income level, which has been stuck at Rs 10 lakh since 2012-13, the lower income group certainly welcomed the news.

Although there were no changes in the tax slabs for senior citizens, there were other deductions provided to the people in the golden years of their lives. The few changes made were,

The PM Modi led government strived really hard to achieve a cashless and paperless economy and it won’t be wrong to say that the efforts have certainly borne fruits. A lot of different channels were brought into the picture for the digitisation of finance – UPI, Aadhaar linkage, amendment to money laundering acts, etc., all helped towards easy opening of bank accounts. The move was geared towards increasing financial inclusion in India and helped Indians avail bank services, residing at even in the remotest of locations.

We’ll leave it up to you to decide whether the Modi led BJP government’s 5 year tenure was a failure or a success, on the personal finance front.